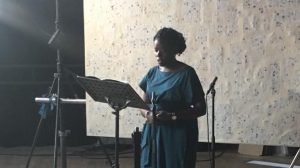 Last week, I had the chance to participate in a recording session in Marseilles. It was for the project MITRA, future opera by Jorge Leon, based on the real life of the Iranian psychoanalyst Mitra Kadivar. For a few days, we played the voices of various characters (doctors, teachers, students, neighbors, patients) involved in this story. These words and emotions were set to music by George van Dam and Eva Reiter, present on the set. Our sessions were plunged into a strong atmosphere, accentuated by the presence of Mitra Kadivar herself. A documentary was filmed meanwhile the audio recordings.

It was an intense experience that I won’t forget, because of the technical music of course, but especially for the human creative aspect. I highly recommend you to come and see the final result in the Halles de Schaerbeek (Brussels) next May. More informations on Ictus website or La Monnaie website. The documentary should be released around the end of 2018.

On the few pictures, you can see our recording sessions in the dome of the GMEM in Marseilles, conducted by Georges-Elie Octors and Polina Bogdanova. You can also discover some shots taken on the last day of filming in Cassis. We have been initiated to the job of actor… and repeated shooting ! I won’t forget either my (long) wait into the icy waters of the Mediterranean 🙂

Join the discussion and tell us your opinion.

We use cookies to ensure that we give you the best experience on our website. If you continue to use this site we will assume that you are happy with it.Ok